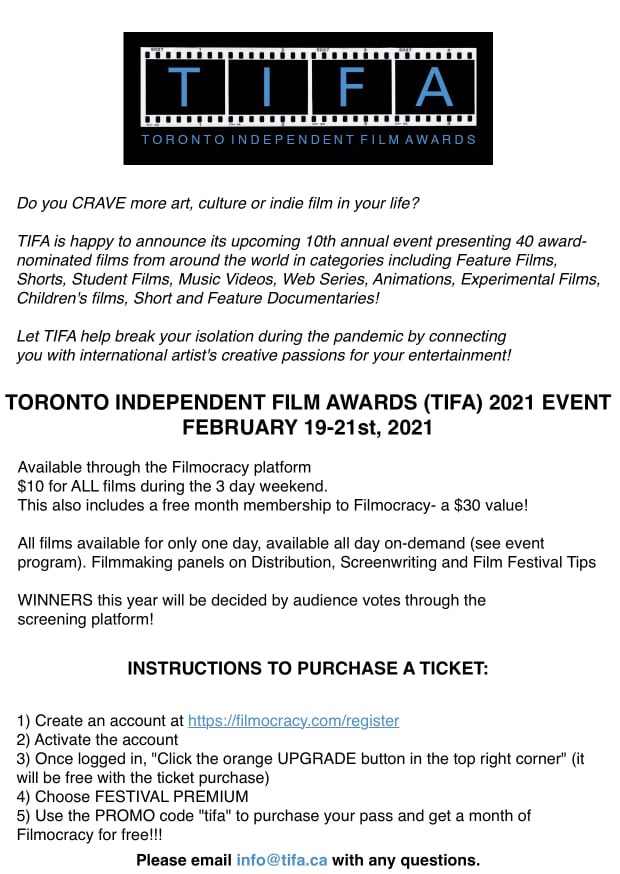 Filmocracy is a film and festival streaming platform that rewards users for discovering amazing independent films. Users earn virtual popcorn for watching and rating movies, which can be spent in our shop to earn movie tickets, redeem gift cards, or attend virtual film festivals we host from around the world.

Re-Inventing The Wheel, Directed by Chelsea McEvoy, Canada
No Rose’s On A Sailor’s Grave, Directed by Daniel Oron, Canada
Let’s Talk “Mental Health In Color”, Directed by Camille Bradshaw, USA
Out of Chaos, an Artist’s Journey in Haiti, Directed by Pascal Giacomini, USA

The Story of the I’m Alone, Directed by Allison Wolvers, Canada
Going it Alone: A Guide To Being Single In the Pandemic, Directed by Rebecca Silvers, Brent Rose, USA
Rescue Master Tang, Directed by Adam Juang, Taiwan

TIFA has been dedicated to showcasing and supporting independent filmmakers and writers worldwide since 2010. TIFA’s mission is based on three main values: Accessibility, Diversity and Equality.  For that reason, TIFA screens and awards films and screenplays from every country, in all genres, and in a range of production budgets. TIFA accepts feature films in four subcategories, but also highlights categories that are often overlooked such as experimental films, web series, animations, music videos and children’s films.